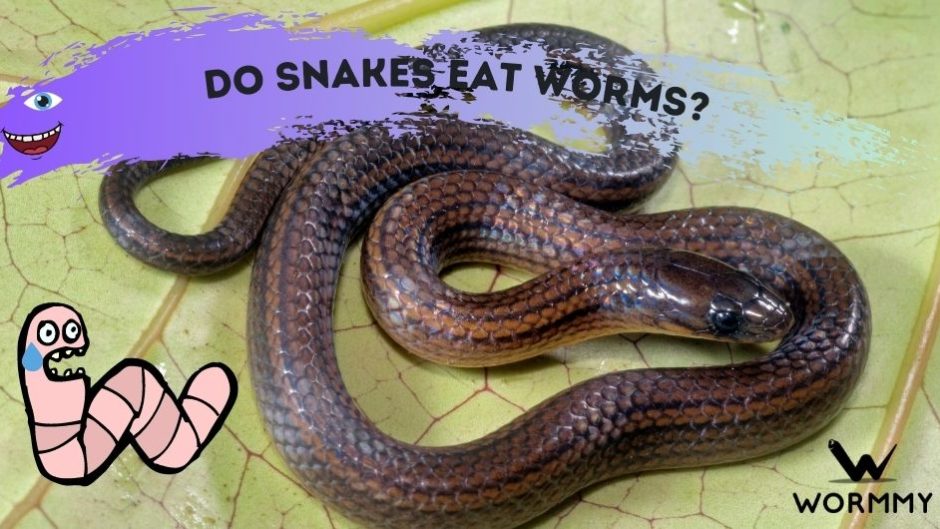 Yes, snakes eat worms, especially earthworms, because they are all carnivores.

Snakes eat worms and most of their diet is dependent on different species. Many eat warm-blooded prey such as rodents, rabbits, and birds, while others eat insects, amphibians such as frogs and toads, eggs, reptiles, fish, worms, and slugs.

Snakes eat all of their food at once. Mice, rats, gerbils, and hamsters are common foods for the most famous pet snakes. Entire rabbits are even also eaten by larger snakes.

Yes, snakes do eat earthworms. Water snakes, garter snakes, and ribbon snakes are the one that feeds on earthworms and other small insects because these snakes are small in size and they often feed on smaller animals.

Snakes that consume just insects, earthworms, spiders, snails, and other invertebrates are a better choice than snakes that feed on rats and mice.

Only two or three small garden earthworms, one-quarter to one-third of a large bait store nightcrawler, a few feeder guppies, or one large feeder platy should be fed to a baby snake. Baby snakes should feed on smaller meals because those are easy to digest.

Yes, snakes can also eat mealworms, but every snake has their unique need as smaller snakes, such as the garter snake, eat crickets, cockroaches, and insect larvae like mealworms.

While seeing small snakes in the yard or garden can be frightening, they can be extremely beneficial in pest control.

Also, rough green snakes feed on different small insects and various other small animals rather than mice or rats.

Should you feed your pet snake worms?

Garter and ribbon snakes are so common that you’ve probably spotted one in your garden.

They are a species of tiny snakes, perfect for individuals who are afraid of huge pythons.

These creatures consume everything they can, which implies that they will consume rodents of the correct size and eat larger animals.

Fish, tadpoles, lizards, insects, frogs, and earthworms are all part of their diet.

Crickets, spiders, moths, caterpillars, worms, and many other insects should be given to rough and smooth green snakes as a source of food because these insects have soft bodies and are easy to digest.

Both of these snakes are related and require the most care. The rough green snake is bigger, which requires a larger living space.

The majority of their diet consists of different types of insects, including worms.

What type of worm should you feed a snake?

Earthworms are a potential source of parasite transmission, and sometimes the worms are gathered from roads, sidewalks, and golf courses following rainstorms.

These worms are easy to get, but they might have some poison. Some snake species will prefer them over anything else, and most baby snakes will also prefer earthworms.

Worms are typically the only meal that garter snakes will consume consistently.

If you find large, muscular worms in your yard, make sure to break them up into little pieces before feeding them to small snakes.

Because snakes want their worm prey to wiggle a little, they may overlook them if you cut them into too little pieces.

Red wigglers are the worms that are used in vermicomposting and are occasionally offered as trout bait. These worms should never be used to feed a snake since they emit a yellow ooze which are poisonous to them.

Are worms good for snakes?

Worms are also calcium deficient, but there is some dispute over whether this is a reason for worry or just a precaution. If your snake’s diet consists mostly of worms, try to supplement it with calcium regularly.

Worms are not particularly large or nutritious. Therefore, the snake must consume a large number of them to obtain adequate nourishment.

In addition, the worms do not have enough calcium, which might be harmful to a pet snake.

If they are solely eating worms, they will require a variety of nutrients. Snakes may also have watery feces if they eat too many worms.

Depending on where these worms are gathered, they might include parasites or poisons.

Feeding your snake is done by the type of food you give your snake, and the amount of the food is determined by the snake’s size. Snakes that eat worms require more frequent feeding than snakes that eat fish, requiring more frequent feeding than mouse eaters. Worm eaters must be fed every two weeks. Young snakes should be fed more often. After all, they could possibly eat every other day because they are on an earthworm diet.