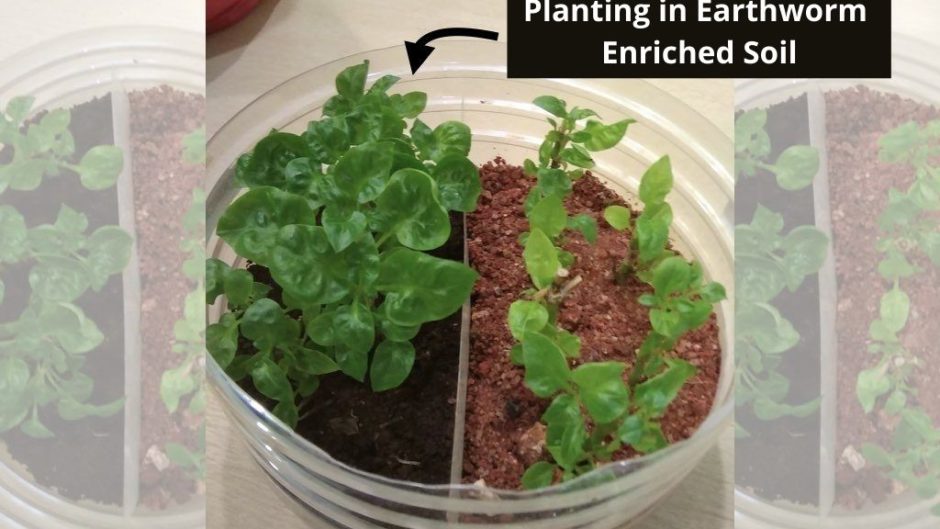 Flower growers call it earthworm soil, worm farmers may call it vermicompost, and some simply call it compost or even worm poop. The different names all refer to the same thing; Worm castings.

Over a period of time, worms digest their feed and poop it out which leave nutritious worm castings for planting.

This is your earthworm compost or vermicompost and can be harvested.

Sometimes, the colour of the earthworm poop or castings will be darker –  a darker brown because many farmers use cow and sheep dung as worm feed.

In other words, a big factor in the color depends on what the earthworms eat.

Earthworms eat soil and after they have eaten the soil, they absorb the organic matter through the intestine, and then discharge the earthworm soil.

Vermicompost is generally a number of particles piled together.

It is neutral and fluffy and it’s fine to use a lot of it in most conditions and situations.

Some even plant flowers and plants directly into their earthworm castings, though a mix is generally recommended, with many vermicomposters finding plants don’t grow optimally in 100% worm castings.

There are similar findings in research too, suggesting poor air and water circulation, as well as high salt concentrations in 100% vermicompost could be the issue.

There are so many variables between vermicomposts, their nutrient and microbe contents and their effect on various plants’ growth, that it’s very difficult to recommend a one-size-fits-all approach.

It doesn’t burn roots like chemical fertilizers do (though there is some debate that it can), nor does it collect water.

All while containing a decent amount of NPK required by plants. More on this further down this post.

Earthworms have beneficial bacteria in the intestines, so the soil quality they excrete is significantly improved.

As a result, many organic farmers love to use this kind of organic fertilizer which is helpful to the environment and grows healthy plants.

Worm castings are not smelly at all and earthworm enriched soil smells like your regular soil.

The nutrients and composition of vermicompost

Compared with general fertilizers on the market, the nutrients of vermicompost are very balanced and comprehensive.

There are also many kinds of trace minerals which makes plants more resistant to diseases and less likely to die.

Studies have also pointed out ( 1 ) that compared with chicken manure, planting tomatoes with vermicompost not only increases the yield, but also significantly improves the soil quality.

In Malaysia, I personally knew some fruit farm owners who used worm castings and found that their fruit production increased, and the crop was larger and sweeter.

One thing to reiterate here is that not every plant is suitable for the use of vermicompost and may be negatively affected, instead of having a positive impact.

Always research the plant you are trying to grow first.

What is the NPK of Worm Castings?

Worm castings generally have an NPK ratio of 5.5.3.

The NPK ratio means the percentage of each Nitrogen (N), Phosphorus (P), and Potassium (K).

They are rich in nitrogen, phosphorus, potassium, iron, sulfur, calcium and other vitamins and trace minerals.

While you can buy worm castings or compost commercially, they won’t usually be anywhere near as rich in nutrients.

That said, here is a little experiment I did with 100% worm castings vs ordinary soil.

Though, to make for more interesting findings, I could have tested mixed concentrations like 50/50 and 80/20.

So, take this experiment with a pinch of salt and a basic demonstration of the benefits of worm castings!

What do Worm Castings do For Plants?

I planted some small vegetable seedlings into the same pot (which I halved first).

On the left is what I planted with 100% earthworm soil. On the right is the ordinary untreated soil from my garden.

The result is that the vegetables grown from the worm manure on the left side are bigger and much more lush.

The one on the right grew relatively slowly and came out a little thin.

Should You Put Earthworms in with the Potted Plants?

Although it would be nice to put a few earthworms in the pot, it actually depends on the size of your pot and the number of earthworms.

Earthworms can be beneficial or pests, especially when planting smaller seedlings, earthworms have a habit of eating roots.

And if you put too much water in a small pot, the earthworms will try to escape and crawl out.

In fact, the commonly used soil for potted plants is already very soft and has good air permeability.

So, it is not encouraged to put earthworms in the potted plants directly.

Instead, you can directly buy worm castings, or get a worm bin and produce it yourself, before collecting and using it.

As a side benefit, your food waste such as the peels of vegetables and fruits in your house can also be thrown in as food for earthworms.

The flowers and plants that are environmentally friendly and save money can also help you.

If you’re interested, here’s my article for novices about worm farming.

Also, a look into the price and development prospects of earthworms .

How to Make Vermicompost and Earthworm Castings

It is not difficult to make earthworm castings or vermicompost yourself.

You don’t need any commercial compost or cultivating soil to begin with.

You can put the food waste directly into the bins and add some dead leaves or potting soil, but more on that later.

Then, based on the diagram below, make three layers.

You might also want to know how to effectively separate earthworms, eggs, and castings < read our guide here.